The researchers at the Search for Extraterrestrial Intelligence (SETI) are looking for the same signs their predecessors were searching for a few decades back. They’ve narrowed down specific planets that are at a safe distance from their parent stars and can possibly hold life.

Like we’ve seen in pop culture, researchers at SETI are looking out for strange flashes in the distance or radio signals that may indicate that other intelligent space-faring beings in our galaxy are attempting to contact us. But there are a few things we’ve been overlooking.

As of yet, the researchers at SETI have cast a wide web. They are following up with as many leads as they can. However, it has dawned on them that if other civilizations in space follow a path similar to that of humans, they may not contact us directly – instead, they may utilize  some form of artificial intelligence or robots to make contact.

The reason why many researchers believe that the initial signals we receive from extraterrestrials may be artificial is because of our own technological path. It didn’t take humans very long to go from inventing radios to building computers – albeit that the first computers weren’t very useful. Senior scientist, Seth Shostak at SETI claims that the technological arc from the radio to AI will be very difficult to avoid. Intellectual aliens would have a much greater understanding of artificial intelligence compared to humans. It only makes sense that they’ll use it to send signals into space.

Like us, once superior alien beings have advanced in artificial intelligence, they will focus on how to make it smaller and more efficient. At some point, AI becomes independent – like it is becoming on Earth.

On Earth, we see artificial intelligence becoming smart and autonomous with the passing of each new day and the same has likely happened on planets in other parts of the universe concludes Susan Schneider from the University of Connecticut.

At the foundation of all artificial intelligence are complex algorithms. As of yet, the algorithms on Earth haven’t reached the complexity needed to develop autonomous beings that can present a danger to humanity.

We use algorithms on a daily basis in the form of our recommendations on Amazon or Facebook that provide vast amounts of information between and so many human beings and places all over the planet. But we a have a long way to go before we develop completely independent, highly intelligent robots that may one day be a risk to humanity. Even in the next two decades, we’re probably not going to have AI technology that could cause us harm.

With that being stated, humans did develop AI fairly fast. We first began conducting AI experiments as early as 1946, whle we were working on building our first computers. By the year 1954, humans had developed a neural network which emulated the human brain and its neural connectivity. As with human beings on Earth, other alien intelligent civilizations should have already developed AI for digital computing and other purposes.

According to science, alien civilizations DO exist – the math shows that they are out there and the numbers of UFO/alien sightings have also increased on Earth since the end of World War II and the developmnet of nuclear weapons. The contradiction between the math and evidence is known as the Fermi Paradox. 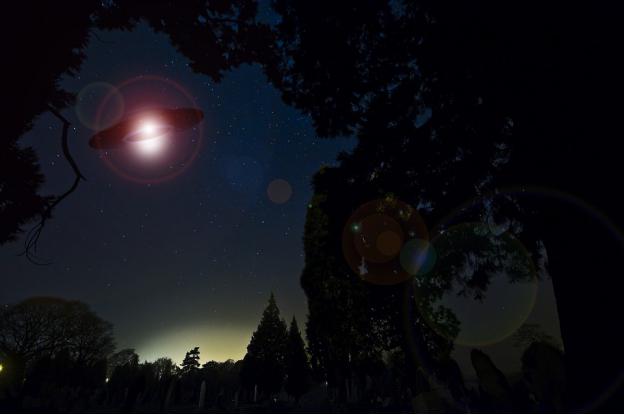 So if science states that alien beings are out there, why haven’t non-classified scientists heard from them?

One answer to this question is the Great Filter theory.

The Great Filter proposes that civilizations are likely to destroy themselves after attaining a certain level of technology and intelligence.

This theory suggests that technology brings with it its own share of problems. The threats posed by technology exceed its benefits according to this line of reasoning. Those with greater technology will likely doom the planet and cause the annihilation of all life on the planet..

Case in point: the first functional digital computer was developed between the years 1939-1946; and the earliest nuclear weapons were developed around the same time. Human beings on Earth have a tendency to abuse technology and power and this could have caused the dissintegration of many ancient civilizations.

We’ve attributed the destruction of past civilizations to everything from famine and climate change to nuclear war. There’s a chance that once we’ve advance in technology far enough, we may repeat the same mistakes made from ancient history and possibly kill-off all mankind on our world.

Direct experience-based, hidden truth revealing researcher R. Scott Lemriel has been interacting with intellectual beings from outer space for much of his lifetime. His travels through the multiverse have unveiled many deliberately  hidden truths regarding planet Earth’s far more ancient past than is know today, which also involved both benevloent and malevolent extraterrestrial influences. More importantly, he discovered where human and all life on our world is now headed because of a recently decided off-world decison that has permanenty changed Earth’s destructive destiny to that of an entirley unexpected, uplifting worldwide transformation. What is underway now cannot be reversed by any negative being or misuse of technology on Earth or out among the stars.

As some non-classified scientists and the Great Filter theory suggest, Lemriel also states that humans are inclined to abuse power and technology and harm themselves in the process. However, he also sates that hihgly advanced kind extraterrestrials  have helped humanity from annihilation in the past unknown to the masses of people on Earth today and they will do so again.

There are signs all over the planet that strong, intelligent alien or extraterrestrial beings, many of them humans that did not evolve on Earth, coexisted peacefully on the planet back in its far more ancient past – this explains the existence of ancient sites like the Pyramids and Stonehenge (that may have served as anchor points or location beacons for extraterrestrial spacecraft), and the Moai heads of Easter Island, among so  many other unexplainable monuments errected in the ancient past around the globe.

The Pyramids have carvings of life-forms with elongated heads that are alien references and pictorgraphs of extraerrestrial spaceships as well. Non-classified scientists and archeologists have failed to provide answers as to how these ancient mega-structures were built and why they have strange carvings that suggest that humans were not alone on Earth.

Find the answers to the Earth’s greatest mysteries and unravel the deliberately hidden truth about extraterrestrials by going on the adventure of exploring Lemriel’s books, The Seres Agenda and The Emerald Doorway (first book of The Parallel Time Trilogy). Lemriel’s books, mirror his own direct experiences with benevolent extraterrestrials, journeys alsong the past time-track, visits with kind non-terrestrial space-faring beings and interdimensional travel. In the The Seres Agenda, he shares that the Earth is undergoing an uplifting transformation after which all of humanity will learn in non-destructive way that extraterrestrials are in fact real.

In addition to his books, Lemriel also shares his enlightening adventures during radio-TV show interviews with him, during special presentations he condcuted at hidden truth revealing international conferences, woven into his uplifting music and within the story structures of his short and full-length feature film project developments.  To discover ever so much more through your own direct experiences visit his primary website at www.ParallelTime.com

You can leave a reply or Trackback this post.