According To a New Simulation, Climate Change Could Have Destroyed Aliens and It Could Kill Us Too

Home / News / According To a New Simulation, Climate Change Could Have Destroyed Aliens and It Could Kill Us Too 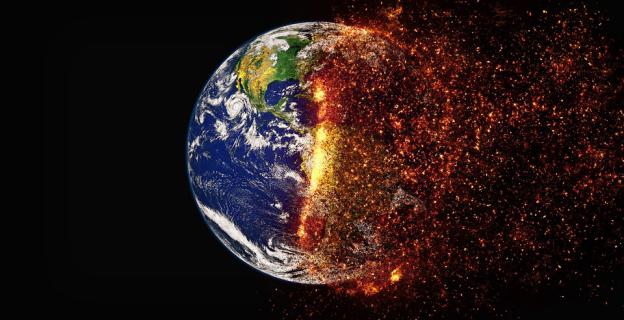 According To a New Simulation, Climate Change Could Have Destroyed Aliens and It Could Kill Us Too

There are indications in space and on Earth that alien species do exist but because the non-classified scientific community relies on observation and evidence they are permitted to see, it still cannot confirm their existence.

The scientific community has come up with various theories as to why humanity has still not discovered aliens. The latest addition to this list of speculations is a theory developed by an astrophysicist by the name of Adam Frank. Frank suggests that aliens may have propelled Climate Change which ultimately led to their destruction.

Climate Change and the End of Humanity Frank published a paper in the Journal of Astronomy in which he presented the “10,000-light-year” view of human-caused affects on the climate and its impact on mankind.  In basic terms, Frank details how humanity is causing climate change and how it may eventually lead to our end if it is not reversed or neutralized altogether.

The Fate of Rapa Nui – the inhabitants of Easter Island

It’s a negative bend or way of looking at things but Frank’s theory is backed by mathematical models. Frank and his colleagues have come up with 4 possible scenarios that could have wiped out older civilizations and possibly alien civilizations as well. His models are based on the real-life scenario of Easter Island. The inhabitants of Easter Island – the Rapa Nui – were supposedly killed after they exhausted all of the island’s resources and created an inhospitable environment to live in. Easter Island is commonly used as an example of what could happen to humanity unless we start paying attention to sustainability.

Frank states that the laws of physics prove that humans will affect climate change. He describes humanity as an “energy-intensive civilization”. We draw energy from natural and synthetic sources and this use of energy has consequences – Climate Change being one of them.

Frank and his colleagues devised 4 trajectories to show what could have happened in other civilizations and what may happen with humanity in the near future.

3 out 4 trajectories end in apocalypse but not all…

In Frank’s study, the rise and fall of temperature represents human impact.

Frank called his first trajectory “Die Off”. In this scenario, the population of the species (humans or aliens) grows exponentially during a short-period of time during which they exploit their natural resources and emit tons of greenhouse gases. Excessive energy consumption and the continuous release of greenhouse gases cause temperatures to spike.

The population grows until the high temperatures starts taking a toll on the planet and its species. Due to the hostile environment and the lack of necessary resources, the species begins to die and only a few survive.

This is the only trajectory in which the species survive. In this scenario both the population and temperatures rise steadily but once the inhabitants realize that essential resources are depleting, they turn to more sustainable solutions. To establish equilibrium, the planet will have to completely replace non-renewable energy sources and energy sources that cause harm to the environment with sustainable resources. For example, instead of relying so heavily on oil, we could start using solar energy instead.

Only when we make the switch and limit the use of hazardous non-renewable resources, can the planet’s inhabitants work together to save themselves and we are not alone, so states hidden truth revealing author R. Scott Lemriel. We will be getting to him a bit later.

3rd and 4th Trajectories – the Collapse

Both of Frank’s 3rd and 4th trajectories are referred to as “The Collapse”. Just like in “Die off”, the population and temperature of the planet rise together except this time no one survives. The sensitivity of the environment determines whether some people survive or all die. In the 4 Trajectory named “Collapse with resource change”, the species do realize that they need to prioritize sustainability but it’s too late – the damage is already done and cannot be reversed.

Some no-classified scientists fear we may already be at a point of no return. It is understandable that they operate from fear because they are kept in the dark about what is underway out among the stars among kind fellow beings to assist this world’s people to turn this around.

The major takeaway from Frank’s Climate Change simulation is that there is a need for humanity to act now. Our survival depends on the how quickly we stop depleting resources and causing the planet’s temperatures to rise.

What does it say about Alien Civilizations?

According to Frank, there is evidence that suggests planets in our own Solar System (like Mars) may have had life at some point. It is possible that they too may have caused their own destruction like many civilizations on Earth. There are also signs on Earth that suggest that aliens may have walked the planet centuries ago. It could explain the unsolved mysteries of many ancient mega-structures that reside on the planet such as The Pyramids and Stonehenge, etc. The Pyramids actually have engravings of aliens and disk-shaped aircraft!

To many inexperienced people on Earth, it appears that is possible they walked the planet alongside ancient human civilizations before they were wiped out! According to hidden truth revealing author R. Scott Lemriel, they were not wiped out; they just left when cyclic polar shifts of the planet occurred that did wipe out most life.

Direct experience-based, hidden truth researcher and author R. Scott Lemriel states that aliens have not been wiped out, they have been around humans in the past and are still around us.

According to Scott, humans have a tendency to self-destruct due to the exploitation of resources and abuse of power by elitist tyrant rulers on Earth that were covertly subconsciously influenced to behave as tyrants by tyrant extraterrestrial misuse of advanced technology. Reversing all that was diabolically done recently began out among the stars and behind the scenes on this world. Human beings are very capable of bringing an end to our own kind on planet Earth but they are also capable of helping to co-create the reverse of all this with the kind assistance of a vast host of beings, many of them human, who are not from Earth and who do not have subconscious minds or negative subconscious emotional influence misdirecting their choices.

Societies unknown to people on Earth today have destroyed the surface of this planet in a past long, long before any recording history and it appears that we are once again on the same path. However, ‘they’ are involved in new ways to turn this around for the first time in all galactic history.

Through Scott’s inter-dimensional travels, he’s connected with benevolent extraterrestrials who’ve shared the deliberately hidden truths of the origins of humanity and the future. They’ve revealed to Scott through his own direct co-creative participation that the Earth is beginning to experience an uplifting transformation; this shift is spearheaded by the kindest highly benevolently and technologically evolved extraterrestrial beings that are far more advanced than us humans on Earth.

To find out more about the Earth’s transformation and what the future holds for humanity, check out Scott’s hidden truth-revealing book, The Seres Agenda. While you’re at it, take a look at his book The Emerald Doorway (book one of The Parallel Time Trilogy series) to gain insight into Scott’s experiences with inter-dimensional travel and interactions with otherworldly beings for your own uplifting benefit.